Gubaidulina’s String Quartet No. 4 was composed in 1993. It was commissioned by the Kronos Quartet and first performed on January 20, 1994 in New York City. It is so far Gubaidulina’s only work for instruments and tape.

The work consists of three string quartet layers (A, B, C) with layers A and B to be pre-recorded and played back synchronized to the layer C which will be performed live. A “Coloured Light Projection” can be performed ad libitum. It is based on a scale containing the colors yellow, orange, red, green, light blue, dark blue and violet plus an additional “black” light (s. below). The light projection is notated in three additional systems (Luce 1-3) that correspond to the musical layers A, B and C.

In layers B and C the instruments are tuned normally, in layer A they are tuned a quarter tone higher. In layers A and B the musicians use a super ball mallet instead of a bow to obtain a continuous “ricochet“ effect. This sound material clearly differs from the material used in layer C and appears there only in the last section after the tape has finished.

The piece begins with the tape introducing the instruments one by one through canonic imitation, alternating the quarter tone shifted twin instruments in layers A and B. The theme is a plain melodic sequence of four 5/4 bars based on the tetrachord f g a b♭ divided in 4 cells by breathing rests. While twin instruments share the same written transposition, the pairs are transposed by augmented fourths or a perfect fifth, covering the whole soprano register. The order of entry is: violas (first sustained pitch a1), second violins (d♯2), first violins (a♯2) and violoncellos (e♭1). Once this process is completed the instruments continue to repeat the sequence until the end of the tape. At rehearsal number 12 the outer voices start to drift chromatically until the violoncello has reached the lowest register (C♯) and the first violin its highest pitch (g♭3). Afterwards the first violin returns to its initial register.

The musical material of the live quartet is developed in twelve fragments starting at rehearsal number 3. The duration of the fragments gradually increases. They play an increasingly dominating part in the texture, reaching a climax at rehearsal number 26. An expressive unison that makes clear reference to the sequence used in the canon is finally reached before the coda, based on the ricochet playing technique of the tape, appears after four bars without music dedicated to the light projection solo. In case of a performance without light, those bars will be of course omitted.

The light projection has its own dramaturgy. It presents different mixtures of colors along the piece generating tensions –perhaps comparable to that of chords– that finally “resolve” into a light blue at the end of the solo.

With respect to the intended effect of the light projection, the composer writes in a letter: “It is merely a hint at life at a subconscious level, secretly present during the performance. This is the reason why the color events are so static. […] the result should not have too much of an effect visually, but should almost be a mere secret breathing of the colors.” (Letter by S. Gubaidulina to G. Toro Pérez, December 7, 2015).

The score for Quartet No. 4 (Edition Sikorski 8506) includes separate instrumental parts. There are short instructions on recording the tape part and on realizing the color light projection. The indication “black light” at rehearsal number 2 allows for different interpretations. Moreover, several questions related to the position of the lights, the use of screens, etc. cannot be clearly answered on the basis of the information included in the score. A correspondence with the composer (s. Appendix) may help to clarify those issues.

While early prints of the score in the introduction mention a pre-produced tape that can be rented, such a tape does not exist, as was confirmed by the publisher. The tape therefore has to prepared by the performers.

The Sammlung Sofia Gubaidulina at the Paul Sacher Stiftung includes drafts and fair copies for the Quartet.

According to the introductory notes to the score, the layer B (normal pitch) should be recorded first, layer A, a quarter tone higher, afterwards.

The score mentions two possibilities of realizing the light projection: lighting the space or projecting colors on screens in different directions. Nevertheless, those instructions shouldn’t be understood as the only possible solutions (s. below).

The setup consisted of a main stereo microphone (ORTF) and four close-up microphones (cardioid polar pattern). The spot microphones had to be placed as close as possible to the instruments due to the very soft sounds produced by the superballs. Even with very good mic preamps, noise floor and signal to noise ratio were critical issues.

Four superball mallets had to be built in advance*. Extensive practice with the mallet is needed to make it rebound regularly during longer notes (4 seconds). This is especially challenging on the lower register of the violoncello.

For recording, a click-track was produced in advance. In each layer (A and B) the four instruments were recorded simultaneously.

The score can easily be misunderstood with regard to the note duration in layers A and B. In our opinion, the hatched legato line should be understood as a slur. In this way, the figures that are repeated within a voice and imitated by another instrument are identical, independent of their placement within the bar and according to the canonic structure of the music. Dividing the notes at the beginning of a system or after two eighth-notes would over-articulate the voices and blur the polyphonic structure.

A dedicated click-track for layer C was produced for performance. Performers used a personal monitoring system with in-ear headphones. 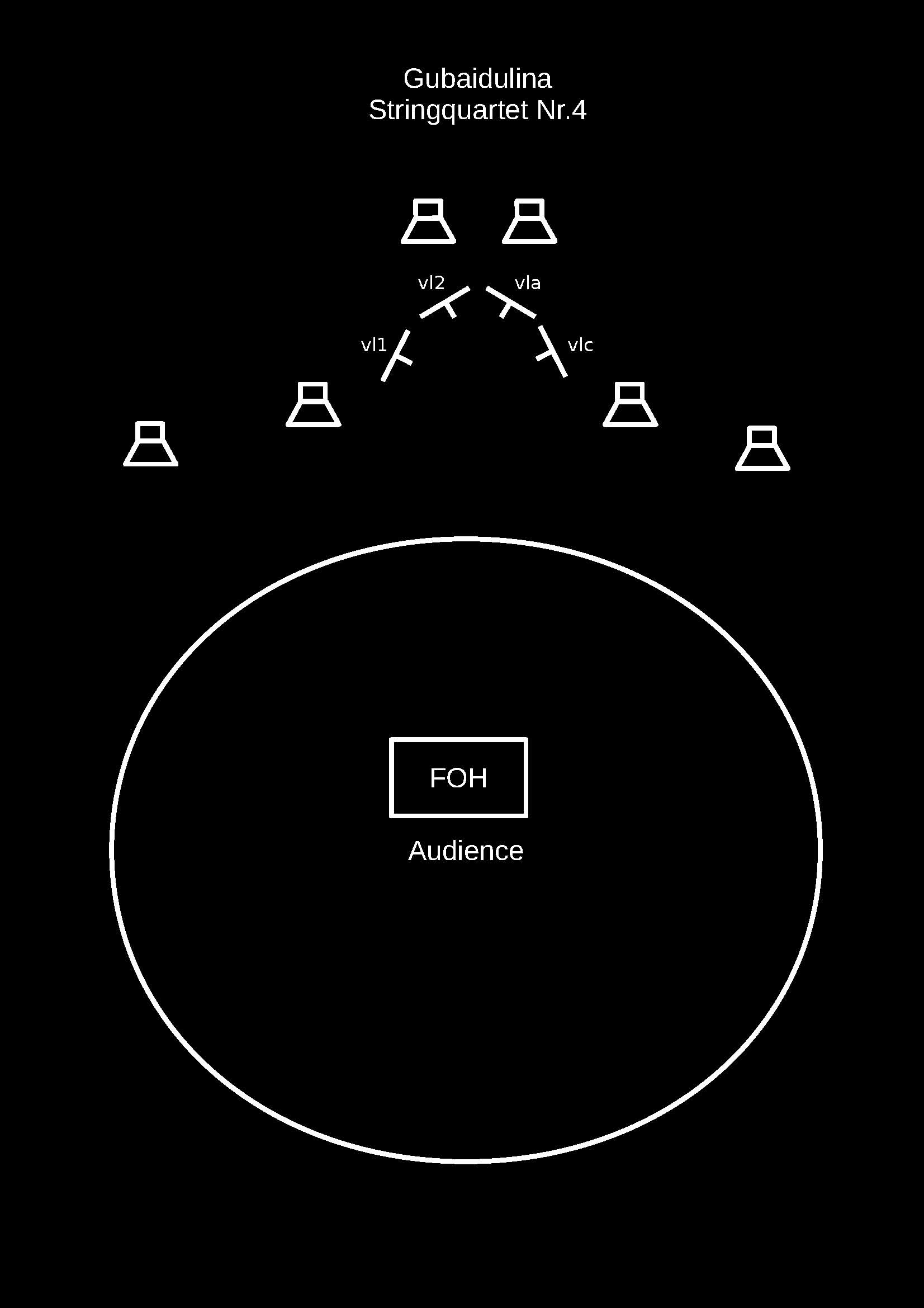 The sound image of the tape was widened in order to make the delicate texture perceivable during dense passages of the live string quartet, but it was nevertheless kept in the background.

Although it is not mentioned in the score, it is necessary to amplify the live string quartet, especially in the last section, where the musicians play using the superball mallet (rehearsal number 34, after the solo of the light projection). On the one hand, the soft sounds produced with this technique wouldn’t be perceived without amplification. On the other hand, it seems logic to aim for a sound image as similar as possible to that of the pre-recorded layers heard until the end of rehearsal number 29 (the tape ends at rehearsal number 30). The microphones (hyper cardioid polar pattern) were attached directly to the instruments in order to give the performers more freedom of movement. They were not used in the recording process because of their sensitivity to impact sound. In order to control this issue during performance the microphones were high pass filtered in the last section. Here, manual fader riding is quite important in order to compensate for the strong dynamic differences. They result from different techniques and materials being played simultaneously.

Reduced amplification and reverb were used in the sections before aiming for a good balance between live quartet and tape.

For the performance the color organ part was realized using three video beamers (Luce 1-3). The DAW playing back the tape and the click-track sent OSC data to a MAX/JITTER patch generating different color surfaces. In this way an automatic synchronization was possible. In order to blur the sharp light borders created by the beamer and to make the light seem more organic, empty water glasses were placed in front of the beamer lenses, forcing optical refraction. The images were projected directly onto the walls to the left, behind and to the right of the musicians at sharp angles, deforming the geometrical image and making it as abstract and immaterial as possible.

Appendix to performance report: Correspondence with the composer

In order to better understand the intended use of the color organ, the composer was contacted by G. Toro Pérez with specific questions. The following is a summary of some issues discussed.

Lastly, the composer pointed out that she had witnessed only two successful performances of the Quartet; the premiere with the KRONOS quartet and a performance at Lockenhaus with Gidon Kremer and others. In both cases, the initiative of color artists had played a vital role.