Jour, contre-jour (Daylight,  back light) is a piece composed after the reading by Grisey of the ancient Egyptian The Book of The Dead, This text is about the journey of the god of the sun, Ra, through the duration of the day (the life) and his return trip during the shadows of the night (the death).  The myth proposes a sort of mysterious reflection on the life and the underworld. In Jour, contre-jour these two moods of light and darkness in the cycle of life are intertwined into the sole journey during the day. Acoustic and electronic sounds are integrated in the same compositional energy thanks to a process including harmonic and inharmonic sounds.

Even though the acoustic instruments dominate, the whole composition may be listen as an extension of electroacoustic paradigms. More precisely, the piece isn’t just based on the principles of spectralism. It also deals with sonorities delivered by acoustic instruments, but similar to those coming from electronic processes, including additive synthesis, amplitude modulation and time-stretching. Distinctive sound characteristics of electronic processes are mimicked through extended techniques on the winds and strings

Therefore, two concepts have to be known by the interpreters: on one hand the multiple and subtle levels of shade between acoustic and electronic sounds, and on the other hand the nuances between pure harmonic and the colorful variations of inharmonic sounds. The music is more about evolving textures than audible contrasts. In the notes on performance[1], Grisey insists: “absolutely without attack”, “without reattacking”, and about percussions: “the skins must be completely muffled”. The composer précises that all the instruments are amplified, each with its own unique directional microphone, and mixed to balance with the tape and organ via a central mixing console[2].

Quotation of the Program note:

“Without beginning nor end, this kind of clepsydra aims for a particular experience about time“

The global form is a process of 20 phases, each one splitted into 2 parts A and B. Each “A” starts with a chord, and B gives inharmonic sounds. During the piece, the “B” parts are longer and longer. Jour, contre-jour shows a sort of travel through the day, with the zenithal light on the middle of the journey (a truly harmonic spectrum at he beginning of the part A of the central phase, number 20, with a peak of the intensity). This central chord is arbitrary, produced by a non thorough expansion of the spectrum. Before and after, the chords are less and less harmonic. The added shadows (introducing inharmonicity) are produced by ring modulation.[4] The interpreters have to keep in mind that everything has to be without perceptible attacks and endings.

The electronic organ starts in the highest register c4. At about 11’43 the overall spectrum reaches a harmonic state (G) for a short time and evolves further ending in the lowest register (Des1). A moving phase shifter generates beatings; the ring modulation oscillates very slowly between minimum and maximum.

Manuscript score, published 1994 (copyright 1980). It contains a detailed introduction in French, German and English including scoring, general and particular symbols, plying techniques, electric organ signal flow and performance notes. The score contains a system for the organ and indications for sound projection. The system for the tape contains time stamps, rhythms, graphic representations of signals, breaths bands with frequency limits. It contains also the disposition of instruments and loudspeakers and the system configuration. The routing of the channels does not correspond to the recorded indications on the ADAT digitization (see Ricordi ADAT copy). The edition for rent does not correspond to the published version with the same number (see “published score”).

The material sent by the publisher is obviously a copy of an ADAT tape and not the new restored version, although the CD cover is labeled as such. The material contains 8 tracks, the duration of the files is 39:59, the music starts at 5:25. The tracks contain the following:

Tracks 1-4: front-left, front-right, rear-right, rear-left. The routing is indicated at the beginning of each track in English and German.

The sound is (wrongly) transposed due to incorrect sample rate conversion (44,1 kHz instead of 48 kHz), and accordingly, the duration of the music is longer (23’02 instead of 20’29 as written in the score). The source indicated (Master Agon, 12/2014) must be wrong, since the date corresponds to that of the restored version (see “Performance material, new set”).

The material was restored by Mirage, Udine. The sources are two tapes from the archive of the Technische Universität, Berlin: an 8-track master tape and a 4-track tape with a downmix realized by Gérard Grisey and Volkmar Hein. The DVD contains 4 mono files (96kHz/24bit) and one stereo downmix (44,1kHz/16bit) for rehearsal. The stereo downmix includes synchronization signals (impulses), corresponding to instrumental peaks at the even rehearsal numbers. Small correction edits in the time structure were done in order to achieve a precise synchronization with the score (s. Report p. 3). The content of tracks 1-4 corresponds completely to that of the ADAT copy. Since the spatial disposition recorded into the ADAT tape does not correspond to that found in the score (both are ordered clockwise, in the ADAT channel one is front left, in the score it is rear right) the question arises which source should be considered as the right one. The sounds rotate mostly counterclockwise (in spite of the clockwise order of the channels). The main difference thus consists in the position of the main impulses of the tape. In the ADAT disposition they occur backwards, in the score disposition they occur in the front as the main impulses of the ensemble. Which relation between tape and instruments was intended, front-front or front-back remains open.

An additional document “Riport di restauro della parte elettronica” by Luca Cossettini and Angelo Orcalli was provided by the publisher. It describes the sources used, the technical problems found and the implemented restoration techniques and correction edits.

Authorial / Editorial instruction
According to the instructions in the score, eight loudspeakers labeled a-h are to be used as follows:
a, b for the organ and the reverb of the organ
h, g, c, d for the tape tracks 1-4 and e, f for the amplification of the ensemble
The instructions contain very precise information about the amplification, the placement of the microphones and the required effects for the organ. Nevertheless, the notation of the organ part still leaves considerable room for interpretation since the intended sounding result of the hardware effect pedals is not always clear.

Performance report
The piece was not performed within the research project. However, it was possible to take the first performance with the restored version as basis for this report. The piece was played on July 31. 2015 at the Salzburger Festspiele in the Kollegienkirche, Salzburg by Klangforum Vienna, with Sylvian Cambreling, conductor, Florian Bogner and Peter Böhm, sound engineering & sound projection and Markus Urban, system technique & sound engineering. A second performance with the same ensemble, conductor and technical team took place on December 15, 2015 in the Mozartsaal at the Konzerthaus in Vienna.

Amplification
The amplification was realized as prescribed in the score. Whenever possible, hypercardiod condenser microphones were used, attached either directly to the instruments (strings, piano) or placed on stands but very close to them (winds, brass). Headsets were used for the flutes. An additional microphone was placed close to the amplifier of the organ. Its output signal was sent to the mixer via DI-Box as well, in order to be able to blend both signals. For the percussion a wide cardioid microphone was used. A digital reverb was used as requested in the instructions

Playing system
For playback a redundant system with a DAW running on two laptops synchronized by midi machine control was used. The new restored version of the tape was presented here for the first time (see “ Audio: performance material, new set” above).

Other issues
In order to support the conductor by the synchronization with the tape, a floor monitor and a time code display were used. 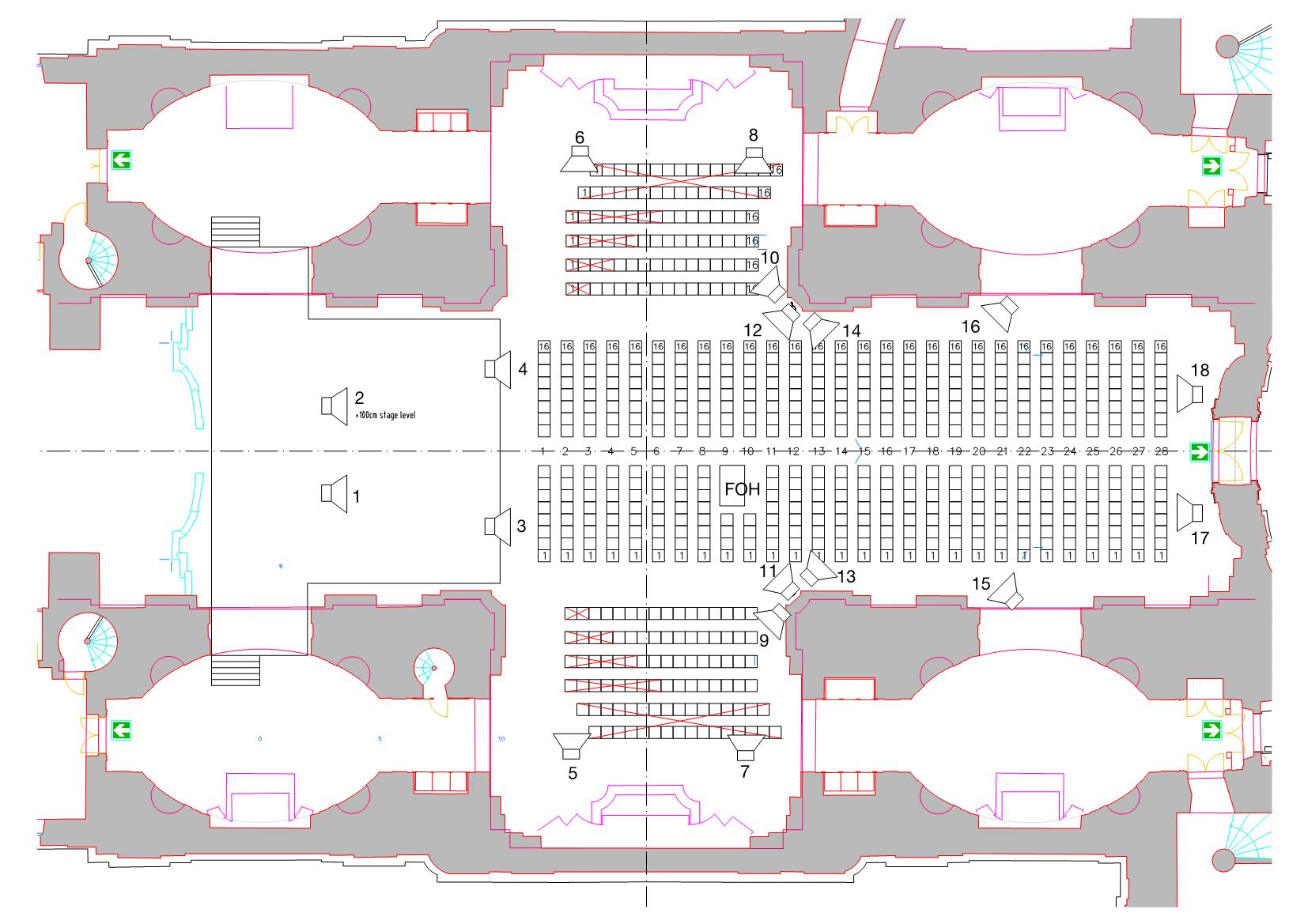