Luciano Berio’s Visage – racconto radiofonico was realized in 1961 at the Studio di Fonologia in Milan, the last published piece to be made there by Berio (Camilleri (2009), p. 107). Having been programmed for radiophonic transmission, the piece was upon completion deemed inappropriate in content and not broadcast (Camilleri (2009), p. 107). As in Thema (Omaggio a Joyce) (1958), Visage features the voice of Cathy Berberian, the whole work in a sense emanating from it (Camilleri accordingly interprets the title Visage as a sort of portrait of Berberian’s personality (Camilleri (2009), p. 108)). In Visage, however, no text was used, but instead, Berio had Berberian improvise several monologues that, while not containing any real words, made use of different linguistic properties that “graphically conveyed ‘content’ by gesture and intonation”, while the only real word used was actually “parole” (Osmond-Smith (1991), p. 63). Elaborating on this peculiar “grammar” of sorts, Berio wrote:

“Based on acoustic symbols, vocal gestures and inflections containing “meaningful images” allowing for all kinds of associations and imaginations, Visage could also be understood as a series of vocal procedures open to metaphor. The speech is mostly onomatopoetic. Visage does not contain a story, but suggests one. One simple word is articulated and repeated, the Italian word “parola”, which means “word”. The vocal events form an articulated or unarticulated speech comprising laughter, cries, sung fragments and diverse inflections modeled on the residual language of “aphasia” etc…. (Berio (1968, p. 78), transl. LB).” Drawing on a montage of the recorded vocal materials that itself seems to convey a dramatic narrative, Berio created the electronic part, which, while reflecting the vocal material, remains in a sphere distinctly separate from the vocal part (Osmond-Smith (1991), p. 64 and Camilleri (2009), p. 108). Berio writes about the relation of vocal and electronic sounds:

“[in Visage] all the families of electronic sounds are connected to those of the vocal sounds; the transfer of the vocal sounds into the electroacoustic domain necessitated enormous research. It is one of the most important works I realized.” (Berio (2013), p. 455).

An important aspect of Visage is its relation to the radio and specifically its (apparent) designation to be presented only on the radio (the publisher only rents the material for radiophonic performances, concert performances require special approval). The description “racconto radiofonico” takes on a strongly ironic meaning taking into account Berio’s statement that “[Visage] was my farewell to radio […] which I have defined as the most common instrument with which to diffuse useless words” (Menezes (1993), p. 138; quoted from Camilleri (2009), p. 120). While the piece thus certainly deals at some level with the medium of radio, this would not seem to preclude any other forms of presentation, which also seems to be supported by Berio’s statement that “Visage is a work for a radio programme, a soundtrack for a drama that has not been written. Its destination is therefore not absolutely the concert hall.” (Berio (1968), p. 78). The piece is known to have been performed with a scenic setting with Cathy Berberian on stage. Also, notable concert performances include performances of a 5.1 version realized by Francesco Giomi and Damiano Meacci between 2005 and 2011, as well as performances of Alvise Vidolin’s own 5.1 version (s. “Performance”).

The archive of the Studio di Fonologia has a stereo tape and copy, a 4-track tape with the indication “versione non buona”, a video with interviews and performance excerpts and

The piece was performed at ZHdK on June 23, 2016. The sound projection was realized by Alvise Vidolin, who presented a 9+1 version he had created on the basis of the stereo tape. A point of departure for realizing this version was for Vidolin the fact that although the piece had originally been intended to be broadcast (the RAI was at the time broadcasting only in mono), its realization in stereo clearly confirms Berio’s interest in the spatial dimension, which at the time was also emerging as a new compositional parameter in electronic music. The approach Vidolin took was to broaden the spatial dimension already defined in the original tape using a system of central and surround speakers to attain a high degree of acoustic immersion with a broad and entraining sound perspective, thus projecting what Berio had created within the stereophonic dimension into a three-dimensional space without changing the sounds and musical content of the original tape. Vidolin converted the original (stereo) audio into three tracks by means of spectral subtraction to create a single track containing mainly the vocal part and a stereo track containing mainly the electronic sounds. While the voice is projected over the central cluster, the electronic sounds are mainly diffused over the surround speakers, involving several techniques such as “transparent amplification” to add a spatial perspective to the stereo image and automated multi-channel panning to control spatial sound movement.

The performer used his customized playback system in which multiple versions of the tracks with different sonic properties (e.g. dry, reverberated and random spatialized with variable speed) are available for live mixing. An additional fader was used to increasingly send the stereo signal to the middle and back speaker pairs, broadening the sound image up to a full immersion. 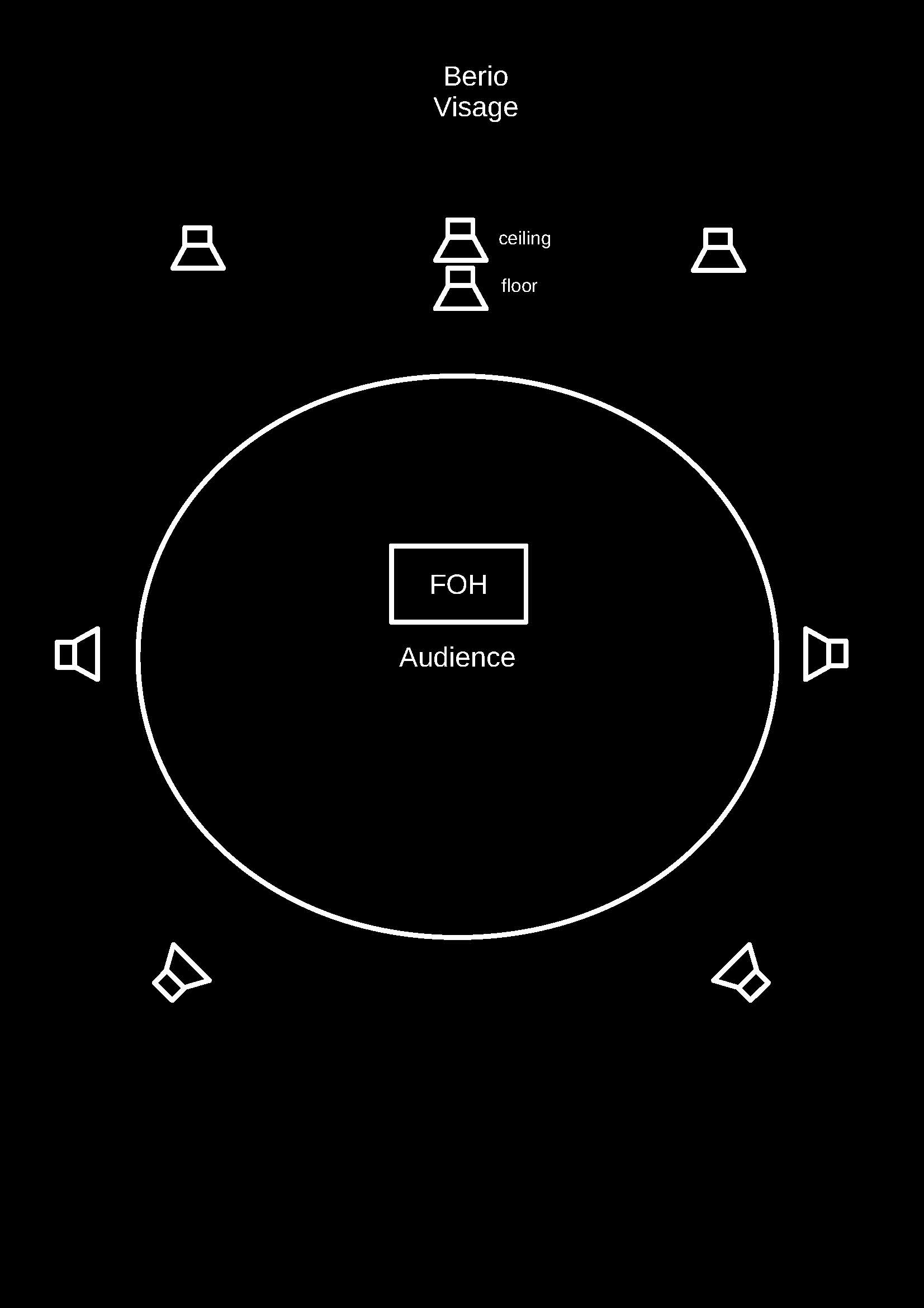